Knee OK, but bad back forces DJ out of Humana 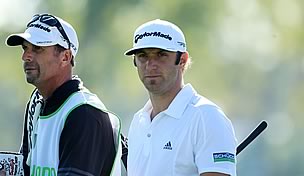 Dustin Johnson withdrew from the Humana Challenge on Friday.

Johnson recorded even-par 72 in his first round at the Palmer Private course on Thursday. He pulled out Friday after shooting 4-over 40 for his first nine holes at La Quinta.

The Humana was to mark Johnson’s first tournament since undergoing arthroscopic knee surgery on Nov. 29 which ended his 2011 season. He said it was his lower back, not his knee that prompted the withdrawal.

“My knee is ok. I am not worried about it,” Johnson said. “My lower back is really stiff and hurting, which I think is from the way I am walking or the fact that I have not walked a lot since the surgery. Yesterday was the first time I walked a full 18 holes. I do intend to play next week in San Diego.'

Johnson was not originally set to make his 2012 debut at the former Bob Hope Classic, however. He and his agent had previously said Johnson would begin his season at next week’s Farmers Insurance Open.