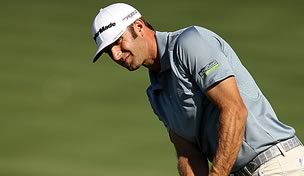 It is little surprise Dustin Johnson finds himself with a share of the first-round lead at Pebble Beach. Eight of his 12 career rounds at the seaside gem, including his fateful four rounds at the 2010 U.S. Open, have been under or at par and he’s finished outside the top 10 just once in five starts.

It is, however, something of a surprise that less than three months after surgery on his right knee to repair cartilage damage he finds himself atop a PGA Tour leaderboard.

“He said he felt good, best he’s felt all year,” said Randy Myers, Johnson’s Sea Island (Ga.)-based trainer. “He’s a really good healer and he had a great doctor and physical therapist. I never saw him more focused than this offseason.”

Myers said the key to Johnson’s offseason was a portable ice machine that “he lived on” for more than a week after the surgery and a focus on his short game while he bided his time rehabilitating his knee.

It was the combination of a rejuvenated short game – he had just 24 putts on Day 1 – and a return to the friendly confines of Pebble Beach that lifted Johnson into a share of the lead.

His fast start was also in contrast to his most-recent history at Pebble Beach. On Thursday Johnson was 6 under through six holes, compared to his 6-over start through six holes on Sunday at the 2010 U.S. Open.