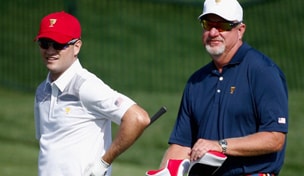 DUBLIN, Ohio – The United States team picture from the 2013 Presidents Cup will forever be missing one of its 12 team members.

Due to a stomach bug, Zach Johnson didn’t make it to Muirfield Village in time for the Tuesday morning photo shoot and wasn’t planning to practice with the team.

“He had what he considers the two- or three-day flu, which was bad enough that he couldn't fly and even be here,” United States captain Fred Couples said. “He'll be, I'm going to say fine. I haven't seen him, but we've talked to him a few times, so he's doing OK. So he'll get in today. You know, he said he wants to come out, chip and putt. We haven't really addressed that yet, but he'll play tomorrow and he's ready to go.”

He is expected to return on Wednesday, one day prior to the competition starting.

Unlike at the Ryder Cup, captain Fred Couples won’t be able to hide him on the bench in the early going. All team members play each session on Thursday and Friday.