Jutanugarn, 17, injured in Wegmans practice round 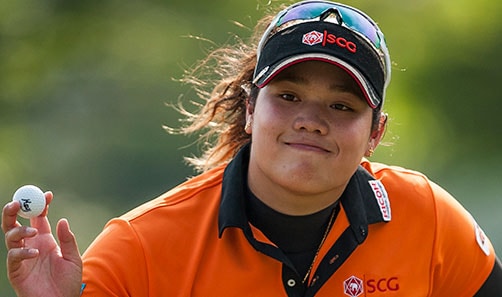 PITTSFORD, N.Y. – Ariya Jutanugarn was injured Monday when she tumbled down an incline coming off the 12th tee in a practice round and landed on her right shoulder at the Wegmans LPGA Championship.

Jutanugan is just 17 and not even an LPGA member, but she is proving a force just about every time she tees it up in a professional event. It’s no stretch to say she would be among the favorites to win the LPGA’s second major of the year this week if she is healthy.

Playing a practice round with her sister, Moriya, on Monday, Ariya jogged down a hill off a tee box when she lost her footing and fell. She immediately left the course to seek treatment. She had trouble raising her arm without pain when LPGA trainers examined her.

Ariya was directed Tuesday to an orthopedic specialist in the Rochester area.

Moriya said the good news is that she didn’t think Ariya’s shoulder is broken or dislocated, but the shoulder muscle hurts.

Though the LPGA reported late Tuesday afternoon that Ariya had not withdrawn, an entry on Moriya and Ariya's combined Facebook page indicated that she planned to do so. The entry states that X-rays Tuesday showed 'her right shoulder shifted.'

In five LPGA starts this year, all as a non-member, Ariya hasn’t finished worse than a tie for fourth place. She has collected $447,772 in money winnings. If she were a tour member, she would be sixth on the LPGA money list.

Ariya nearly won the Honda LPGA Thailand in February, losing a two-shot lead at the final hole. She shot 64 to take the first-round lead of the Lotte Championship and ended up finishing third. She tied for third at the Kingsmill Championship, finished fourth at the HSBC Women’s Champions and tied for fourth at the Mobile Bay LPGA Classic. She is playing on another sponsor exemption this week.

After her petition for a waiver of the LPGA’s rule that members must be at least 18 was denied last year, Ariya moved her focus to the Ladies European Tour and won its qualifying school last December. She won the LET’s Lalla Meryem Cup in March for her first title on that tour. Moriya, 18, leads the LPGA Louise Suggs Rookie of the Year points list.