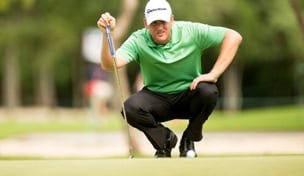 Getty Images
“It was very impressive. The work he has put in is paying off. Besides the 14th hole, he played great golf, and he is looking really good for the future. It looks like he might get a major if he keeps doing what he is doing before the year is out.” – on Woods’ victory at The Players Championship (Getty Images)  -

With rain once again forcing the stoppage of play in Mexico, the second round of the OHL Classic at Mayakoba could not be completed Friday before darkness fell. Here's how things shape up heading into the weekend at El Camaleon, where Robert Karlsson and Kevin Stadler share the overnight lead:

What it means: Karlsson moved quickly to the top of the leaderboard upon completing his opening-round 63 Friday morning, then he was matched late in the day by Stadler. The pair have created a bit of separation from the field, though with only one PGA Tour win between them and a rain-soaked course yielding low scores, the tournament remains largely up for grabs.

Round of the day: Stadler's bogey-free 63 was two better than the rest of the field able to complete second-round play Friday, and a week after playing in the final group at the McGladrey Classic, the veteran once again finds himself in contention as he looks to close in on his first career win. Stadler's round featured eight total birdies, including five across a seven-hole stretch from Nos. 12-18.

Best of the rest: After missing each of his first three cuts to start the new season, Tommy Gainey easily made the weekend in Mexico after a 6-under 65 in the second round. Gainey suffered a trio of bogeys but more than made up for them, carding nine total birdies during his second round, including a six-hole stretch from Nos. 6-11 that he played in 5 under. At 6-under 138, Gainey will start the weekend six shots off the pace as he looks to put himself in position to contend for a second career PGA Tour victory.

Biggest disappointment: A former winner on the PGA Tour, Sean O'Hair is continuing his attempt to return to top form, though that effort was derailed with a 5-over 76 Friday in Mexico. O'Hair appeared ready to make the cut after an even-par 71 in the opening round, but failed to record a single birdie in his second round against three bogeys and a double bogey. As a result, he'll miss the cut for the second consecutive week after starting the new season with a pair of top-30 finishes.

Main storyline heading into Saturday: With many players still yet to tee off in the second round, the landscape of the leaderboard is far from complete. Still, Karlsson and Stadler are on the verge of distancing themselves from the rest of the field heading into the weekend. Though several notable players remain in pursuit, including Moore, a winner last month in Malaysia, the focus remains on the two co-leaders who both seek to punch their ticket to The Masters with a win this week in Mexico.