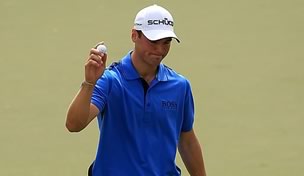 Martin Kaymer recorded his first career hole-in-one Friday at the Dubai Desert Classic. Kaymer aced the 177-yard, par-3 seventh – his 16th hole of the day – with an 8-iron.

“I have been playing golf since I was 15 years of age but my caddie, Christian (Donald) said it might happen this year and it has,” said the 27-year-old German.

The hole-in-one was part of a second-round 5-under 67 which has him at 11 under, two shots back of co-leaders Rory McIlroy and Thomas Bjorn. It could be an omen as 2011 champion Alvaro Quiros made an ace using a wedge on the 11th hole in the final round.

As a prize, Kaymer won a watch from tournament sponsor Omega. Already a spokesman for Rolex, Kaymer handed off the timepiece to his trainer, Rolf Kloettschen, to pay off an 18-month-old bet.

“The sad (thing) about getting a hole-in-one is that my trainer and I have this bet so that he gives me 10 Euros every time I play that hole if I don’t get a hole-in-one,” said Kaymer.

“But if I make a hole-in-one then he gets the prize, so he gets to keep the wristwatch so that’s why he seemed more happy than me.”