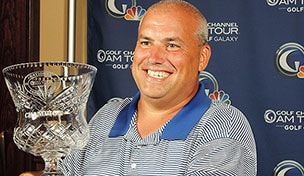 Getty Images
PONTE VEDRA BEACH, FL - MAY 05: Ernie Els of South Africa (R) walks with golf instructor David Leadbetter during a practice round prior to the start of THE PLAYERS Championship held at THE PLAYERS Stadium course at TPC Sawgrass on May 5, 2010 in Ponte Vedra Beach, Florida. (Photo by Richard Heathcote/Getty Images)  -

PONTE VEDRA BEACH, Fla. – In the Jones flight, Rick Ramsey and Rich Kelley went into the final round on the Ocean Course at Ponte Vedra Inn & Club 10 shots clear of the field. Ramsey had Kelly by a shot, so they basically knew they were in a match play situation.

When Kelley went double-double-quadruple bogey on the fifth, sixth and seventh holes respectively, though, he figured he was out of it. But patience, indeed, turned out to be a virtue in the end as Ramsey returned the favor late, and Kelley won in a playoff.

'I thought I was done,' said Kelley, about the poor stretch on the front nine. 'But it actually helped to relax me.'

Kelley, the vice president of a manufacturing company in Katy, Texas, settled down to shoot a 42 on the back nine for a 92. Incredibly, though, he was still trailing by three shots on the final hole when the unthinkable happened to Ramsey, a local who lives right here in Ponte Vedra Beach. Finding himself in a fairway bunker off the tee, Ramsey embedded his second shot into the face of the bunker, had to take an unplayable and eventually made 8, missing a 12-footer that would have won him the tournament. Kelley, meanwhile made bogey, then won with a par on the first playoff hole.

'Neither one of us had great rounds,' said Kelley, who was playing in his first Golf Channel Am Tour National Championship and basically conceding second place on the final hole. 'That was a real punch in the gut on 18 (for Ramsey).'

Kelley was one of four Houston-area players in the top five. Adam Bray of Houston made the biggest jump, shooting the low round of the day with 84 to finish in third, while Kristopher Bixby, also of Katy, and Philip Sumang of Missouri City, Texas, finished fourth and fifth respectively.