Kim loses by 1 at Korea Open after rules dispute 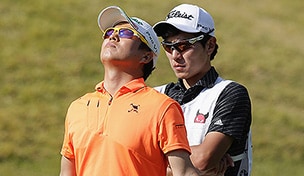 Getty Images
Marc Bulger and Zakiya Randall of Team Bulger practice together on the range before the competition begins.  -

So much for cruising to victory.

Hyung-tae Kim was two shots ahead as he stood on the 17th tee Sunday at the OneAsia Tour’s Kolon Korea Open. That all changed when he was approached by a rules official, who told Kim that he would be penalized two shots for grounding his club in a hazard on the 13th hole.

Kim proceeded to bogey the 17th and couldn’t birdie the 18th, finishing in a share of second (along with Rory McIlroy), one shot behind Sung-hoon Kang.

The discussion of the penalty didn’t end on the 17th hole, however. Before signing his card, Kim returned to the 13th and spent nearly two hours arguing the infraction with rules officials, who had consulted TV replays, according to published reports.

The Korean Golf Association rules committee voted, 5-3, against Kim, and eventually he signed for 6 instead of 4. He finished with 77 after taking a four-shot lead into the final round.

Even Kang didn’t feel like celebrating afterward, telling reporters, “I’m a really good friend of his, so at the moment it doesn’t feel great. Even though I won the tournament, I just feel really sorry for him. I was actually out there to celebrate for him, but … I don’t know … I don’t know what to say. It’s horrible.”