'It was mental': AK ready to start season anew 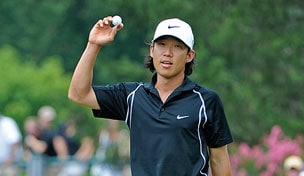 Consider Anthony Kim a bit of a prodigal son. A product of the California desert, the 26-year-old is returning to the Humana Challenge for the first time in four years.

“2011 was a year that I would like to forget very soon, but I learned a lot about myself, learned a lot about perseverance and grinding through those tough times and trying to keep my head up when it looked like I was just taking on water,” he said.

Four years ago, he won twice on the PGA Tour, starred in the Ryder Cup and didn’t look back. In 2010, he went on to win in Houston, contended at the Masters and reached the top 10 in the Official World Golf Ranking. The growing resume made him a hot commodity.

“I actually have had some opportunities to go play overseas, it's been a dream of mine to be a global player, and to be able to travel the world and play the tournaments I want to play and see some of the places I want to see. It's been special to me,” Kim said Wednesday.

In the summer of ‘10, however, Kim underwent surgery on his left thumb. The three months away led into the worst season of Kim’s career. He had just two top-10 finishes last year but, even worse, lost confidence over the ball.

“[I]t wasn't my golf swing, it was mental. It was just (tough) to just let it go. And I started standing over the ball for 45 seconds at a time and as you all know the more you think, the worse and harder this game gets,” said the world No. 84.

Rejuvenated by a late-season flurry, including a playoff loss in the unofficial Shanghai Masters to Rory McIlroy in China, Kim’s season premiere is a chance to re-establish himself on Tour.