Kirk, Baird on top of crowded leaderboard at McGladrey 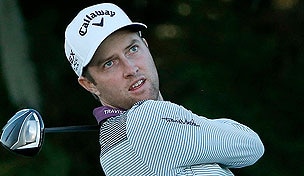 Getty Images
“Everyone knows that Lee and Billy were a great partnership and it made sense that now Billy is fully fit again that the partnership reforms … They’ve had their heart-to-heart, sorted out whatever needed sorting out, and Billy will be back on Lee’s bag permanently, starting at Tiger’s event next week. Mike is a top lad, a class act, and took Lee’s decision as we knew he would.” – Chandler, Lee Westwood’s manager, on Westwood’s decision to hire back caddie Billy Foster, after letting him go 18 months ago.  -

There was plenty of movement on moving day, including late birdie binges by several players during the third round of The McGladrey Classic. Here’s how things shape up heading into the final round at Sea Island:

What it means: There was a log jam at the top of the leaderboard all day, but Kirk and Baird both rallied late to grab a share of the lead heading into the final round. Kirk birdied four of the last six holes, while Baird birdied the last three holes. But they have plenty of company behind them – 14 players are within five shots of the lead.

Round of the day: After opening with rounds of 68-68, Stadler recorded seven birdies and two bogeys for a 5-under 65. Stadler also had the shot of the day at the par-3 17th when he knocked his tee shot to 2 feet for an easy birdie.

Best of the rest: Already playing his fourth event of the new season, Brian Gay fired a 4-under 66 to finish one shot off the lead. Charles Howell III, who is five shots back, also moved into contention with a 4-under 66.

Biggest disappointment: Having already won in Las Vegas, and clearly the most experienced player in contention, Webb Simpson was poised to take control on Saturday. But a double bogey on the par-5 7th hole, and a bogey on 18, left Simpson with a 1-over 71 and four shots off the lead.

Biggest storyline heading into Sunday: The two leaders, Kirk and Baird, each have their own interesting storylines. Kirk is a resident of Sea Island and has played this course dozens of times. Meanwhile Baird, who is coming off surgery on both shoulders, is still trying to claim his first win on the PGA Tour.