Klauk returns to 'other' Sawgrass course 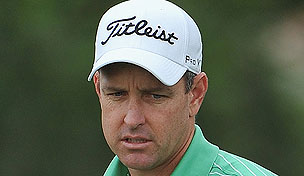 Less than 18 months after undergoing brain surgery to treat epilepsy, Klauk is making a bid this week to return full time to the PGA Tour. He’s practically doing it in the backyard where he grew up.

Klauk grew up in TPC Sawgrass, a short walk to the Dye’s Valley Course, home to this week’s finale in the Web.com Tour Finals. The son of former TPC Sawgrass superintendent Fred Klauk, Jeff grew up mowing the grass on the Valley Course and the more famous Stadium Course.

With an even-par 70 to open Thursday, Klauk doesn’t have to win this week to make it back to the PGA Tour. A top-15 finish might be enough to win him back exempt status. He’s 71st on the Web.com Tour Finals money list, which puts him 46th among players trying to secure the 25 remaining tour cards up for grabs this week.

Four years ago, Klauk realized a dream, teeing it up for the first time in The Players Championship, on the course he revered. He tied for 14th and made more than $1.2 million on the PGA Tour that season.

Back home again, Klauk’s hoping the Valley Course can lead him back to the Stadium Course and his larger golf dreams. He’s back feeling good about the medication and treatment that has quieted his epileptic episodes.

“I’m feeling great, and I’m excited to be playing at home,” Klauk said after his round Thursday. “Health wise, I’ve been doing good, and I’ve just been working on my game.”

Klauk went 15 months without playing a PGA Tour or Web.com Tour event while undergoing treatment for epilepsy in 2011 and ’12. He made four Web.com Tour starts in his return late last year. His best finish in 18 Web.com Tour starts this year was a tie for 20th at the Mexico Championship. He tied for 16th earlier this year at the Waste Management Phoenix Open in his limited appearances on the PGA Tour.

“It’s a journey,” Klauk said. “It’s been challenging, to say the least, just putting it all together, I guess, after not playing for a year or so, but I feel like that’s over with. I’ve played enough rounds. It’s time to do something. I still have the same drive and fire I’ve always had.”