Ko, 16, will play next event as professional 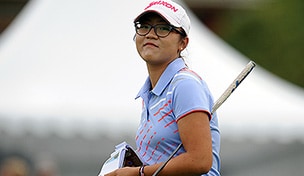 Amateur teen phenom Lydia Ko plans to compete as a professional in the LPGA’s CME Group Titleholders next month.

Ko’s mother, Tina Hyon, told GolfChannel.com Wednesday that Lydia, 16, will make the trip to Naples, Fla., for the tour’s season-ending event, and she’s also considering a possible spot in the Lorena Ochoa Invitational in Mexico, the week before the CME Group Titleholders.

“If she plays any pro events now, she will play as a pro,” Hyon wrote GolfChannel.com in an email.

Notably, Hyon said the family has officially filed a petition with the LPGA seeking a waiver of the tour’s rule requiring members be at least 18 years old. Ko became the youngest winner of an LPGA event when she claimed the CN Canadian Women’s Open as a 15-year-old last year. She won it again this year in August.

As a non-member winner of a tour event, Ko is entitled to claim tour membership. She could seek to claim immediate membership for the rest of 2013 and through 2014. Or, she could defer membership to next year. However, Ko can’t do either without first obtaining a waiver of the tour’s age restriction. LPGA commissioner Mike Whan holds the power to grant or deny such petitions.

Lexi Thompson was 16 when she won the Navistar Classic in September of 2011. She petitioned for a waiver of the tour’s age restriction within a week of winning and was granted the waiver shortly after, though it was deferred to the start of the 2012 season. Thompson played her first round as an LPGA member the day before turning 17 at the ISPS Handa Australian Open.

Ko is still in exams at school back in New Zealand. She’s in year 12 of her education, but there is a 13th year in the secondary school system in New Zealand.

Playing as an amateur this year, Ko left $934,987 on the table in money winnings. As a pro, she would have won more than a $500,000 in her last two starts, the CN Canadian Women’s Open win and a second-place finish at the Evian Championship.