Ko rallies in first round of New Zealand Women's Open 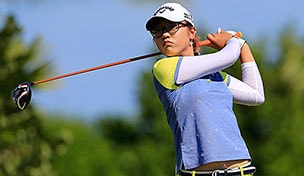 Ko-mania is in full effect in New Zealand this week.

After a rough start, Lydia Ko rallied Friday in the first round of her title defense in her Kiwi homeland at the ISPS Handa New Zealand Women’s Open.

With five birdies over her final eight holes, Ko shot a 3-under-par 69 in the first round, moving into a tie for second, just one shot off the lead at Clearwater Golf Club outside Christchurch with the afternoon wave not quite complete.

Ko, 16, opened her title defense with a birdie, then promptly bogeyed three of her next five holes. Her strong rally left her trailing only South Korea’s Seonwoo Bae (68).

England’s Charley Hull, another teen phenom at 17, also opened with a 69 playing alongside Ko.

Ko, No. 4 in the Rolex Women’s World Rankings, is all the buzz in New Zealand this week. Last year, this championship was promoted as “Ready, set, Ko!” This year it’s being promoted as “Here we Ko again!”

“It will be a tough task winning because Lydia is here,” said Laura Davies, who has won 45 Ladies European Tour titles and 20 LPGA titles.

Davies opened with a 72.