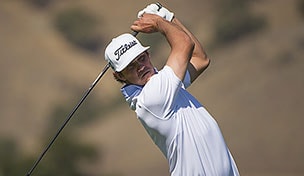 Getty Images
Selanee Henderson cannot hold back the tears on Big Break Atlantis after coming so close to winning.  -

Koepka, a 23-year-old Floridian who earned his European Tour card through winning three times on the Challenge Tour, shot a 4-under 67 at CordeValle Golf Club in San Martin, Calif. He leads George McNeill and Jason Kokrak by two strokes, with eight other players within five shots of the lead.

What it means: This is the first event of the 2013-14 season under the new wraparound schedule. It awards 500 FedEx Cup points to the winner and, more coveted, a Masters invitation.

Round of the day: McNeill and Walker both shot 9-under 62 to rocket up the leaderboard. After making his lone bogey, on the par-5 12th, McNeill birdied five of his final six holes, including the last four in a row. Walker started with two birdies and finished in similar fashion. Like McNeill, he made 10 birdies and a bogey.

Best of the rest: With a tap-in eagle on the drivable par-4 17th, Vijay Singh shot a 6-under 65 to move within three strokes of the lead. Singh, 50, is trying to win while his suit against the PGA Tour is still active.

Main storyline heading into Sunday: Can Koepka, who is playing on a sponsor exemption, earn a Tour card and a Masters invitation with a win? Can Singh win for the first time since 2008? Will golf fans pay attention to a former Fall Series event?