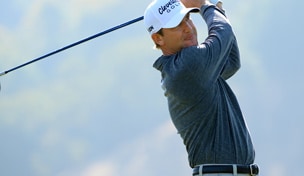 Both players attended Florida State University. McNeill finished in 1998; Koepka in 2012. When the now 23-year-old turned professional, he sought out advice from the 38-year-old.

“I called him right after I qualified for the U.S. Open at Olympic Club and just talked to him a little bit, you know, to kind of get prepared for the golf course and things like that,” Koepka said.

McNeill’s advice, according to Koepka, was to “just be relaxed. Your game is good enough to come out here and play.”

Koepka said the two have crossed paths a few times and met. McNeill doesn’t recall the meeting, but he does remember the conversation.

“We had a nice talk,” McNeill said after posting his third-round 62, tying a tournament course record. “Honestly, I’ve never met him. Never seen him in person. I would like to. The way it looks, I might be playing with him tomorrow.”