Koepka in new, but familiar situation as leader 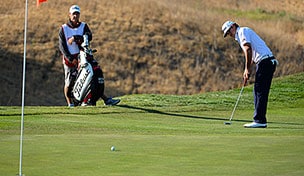 SAN MARTIN, Calif. – Winning breeds winning. At least that’s what Brooks Koepka is banking on Sunday at the Frys.com Open.

For the first time in his career, in his first career start in a regular event, Koepka is the 54-hole leader on the PGA Tour. He's a four-time winner on the European Challenge Tour, all coming in just over one calendar year, and he's going to rely on that experience in the final round at CordeValle.

That and his laid-back demeanor.

'It's all about how much pressure you put on yourself,' Koepka said. 'Obviously, I think there may be some people that don't think I can handle it on Sunday just of the fact that I've never been sitting in this position. Just got to take it as it comes and just be relaxed about it. I'm pretty chill, so nothing really bothers me.'

It’s foreign territory for him in the U.S., but he’s not inexperienced as a leader. Two of Koepka's four Challenge Tour wins came as the front-runner entering the final round. In the other two, he was one back.