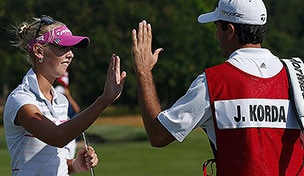 SOUTHAMPTON, N.Y. – Jessica Korda stepped to the media stage outside scoring after a tough Saturday at the U.S. Women’s Open knowing the questions weren’t going to be about firing a good score.

They were about firing her caddie in the middle of her round.

“So how long is it going to take you guys to ask me about my caddie?” Korda said.

Korda fired her caddie, Jason Gilroyed, after nine holes and asked her boyfriend, Johnny DelPrete, to tote her bag the rest of the way. Remarkably, she did this in the thick of contention in a major.

“Had a couple of disagreements here and there,” Korda said. “I wasn't in the right state of mind, and I just was more consumed by what was going on, just not my way. And I knew I needed to switch and just have a little bit more fun out there. It's a U.S. Open. It's tough out there. It just wasn't working out.”

Gilroyed had been on Korda’s bag for about a year. He was formerly Cristie Kerr’s caddie.

“It was tough for me, because I care about Jason a lot,” Korda said. “He is a great guy. That's just how it happens sometimes in life. That was one of those things today, that it just unfolded.

“It was very hard for me to do. I'm not that type of person to take these things really easily. For me, it was very hard to tell him that, and it took a lot for me.”

Korda shot a 5-over 40 on the front nine. She shot a 36 on the back nine with her boyfriend on her bag. By day's end, she was tied for sixth.

“The first few holes, I was very shaky, but my boyfriend/caddie kept me very calm out there, and kept it very light,” Korda said. “And it was kind of funny seeing him fumble over yardage. Like I said, it just kept it very light out there.”

Korda said her boyfriend will remain on the bag Sunday, but he won’t continue to caddie longterm.

“I think everybody has problems every week,” Korda said of the disagreements with Gilroyed. “You blame the caddie, the caddie blames you. It's just up in the air. I just felt like enough was enough today. I just wasn't mentally ready for it.”