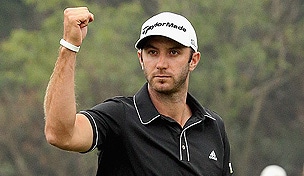 Getty Images
J.J. Henry hugs his caddie Don Donatello on the ninth green after finishing with an 11-under par 60 during the first round of the Shriners Hospitals for Children Open at TPC Summerlin on October 17, 2013 in Las Vegas, Nevada. (Photo by Scott Halleran/Getty Images)  -

Dustin Johnson ended the day exactly where he started (three clear of his next closest competitor), but it was anything but a lazy Sunday. Johnson squandered his 54-hole lead early on Sunday in Shanghai with a bogey on his opening hole to Ian Poulter's two birdies to start, but a late chip-in eagle at the 16th and a birdie at the 17th propelled him back into the lead. It was a three-man race from the onslaught, where playing partners DJ, Poulter and Graeme McDowell all played beautifully and exchanged the lead numerous times, but it was Johnson with the edge in the end.

What it means: Johnson's WGC-HSBC title gives the 29-year-old eight career PGA Tour victories. That total moves him ahead of Retief Goosen and Geoff Ogilvy among active players and into a tie with Sergio Garcia, Mike Weir and K.J. Choi. Johnson has amassed his eight wins in far fewer PGA Tour starts (142) than Garcia (261), Weir (384) or Choi (353). DJ came close to winning the U.S. Open and PGA Championship in 2010, and if he remains healthy, he could be a factor in the 2014 majors.

Round of the day: Johnson's 6-under 66 wasn't the lowest on Sheshan International Golf Club on Sunday, but after looking like he wasn't going to seal the deal, his composure down the stretch made it the most impressive. Johnson opened his round with bogey and failed to take advantage of scoring opportunities to keep pace with Poulter and G-Mac. His first birdie on the round came at No. 8, and he carded four more and an eagle on his way to a three-shot winning margin.

Best of the rest: Had he not began the final round so far back, Sergio Garcia might have given DJ a run for his money – all $1.53 million of it. Garcia's bogey-free 9-under 63 matched the low round Sunday in Shanghai (Richard Sterne also posted 63), and was one more than the course record (62) set in Round 3 by Martin Kaymer. Garcia moved up six spots from the start of Sunday and finished in solo fourth.

Biggest disappointment: Rory McIlroy. It's hard to call three of four rounds in the 60s and a T-6 finish disappointing, but when the whole world is waiting for you to get back in the winner's circle, anything less than a 'W' leaves us wanting more. A strong showing by McIlroy no doubt (punctuated by his first-round 7-under 65), but we won't be satisfied until the 24-year-old hoists another trophy.

Shot of the day: For much of the day it appeared DJ had given up another 54-hole lead in an event (he's now 50 percent in 54-hole conversions), but when he chipped in for eagle at the short par-4 16th, it appeared momentum had finally come full circle and finished in his favor. The shot opened up a two-shot lead at the time and led him to his eighth PGA Tour win and first WGC title.

Quote of the day: “This is probably my biggest win. With the field and the tournament, ya know the WGC. Hopefully it’s just better things to comes.” – Johnson, on whether or not a major championship is in his future.