Lefty derailed by weather on Day 1 of Presidents Cup 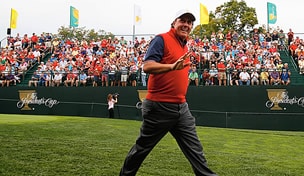 DUBLIN, Ohio – Phil Mickelson had it going early on Thursday, rolling in three birdies on the front nine in his match with Keegan Bradley against Charl Schwartzel and Louis Oosthuizen.

The opening day of the Presidents Cup was delayed by one hour, 22 minutes because of lightning and heavy rains around Muirfield Village. When play continued, Mickelson had cooled off.

“I had a good rhythm early on and when we went back out, I was just a little bit tight and didn't make very good swings,” he said.

Mickelson and Bradley failed to win a single hole on the back nine, losing the match, 2 and 1.

Afterward, captain Fred Couples revealed that Mickelson had warned him this was a possibility during the delay.

“Phil told me it was going to be a little rough,” Couples said. “I just felt in my mind, that that's OK because it's best ball. But he said he didn't play that well. He didn't hit that many great shots, but can't be far off.”

Mickelson and Bradley will again be paired together in Friday’s foursomes, leading off for the U.S. team against Jason Day and Graham DeLaet.