Mickelson's 'bad' day not so bad after all 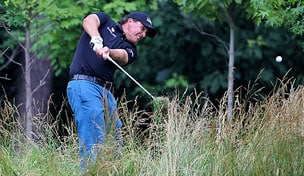 BETHESDA, Md. – It sounds like a scene out of a movie. Just as Phil Mickelson was finishing his opening round of the U.S. Open on Thursday, the clouds opened up over Congressional. Perhaps it seemed fitting considering Mickelson celebrated his 41st birthday by shooting 3-over 74 – nine shots back of playing partner and tournament leader Rory McIlroy.

As Mickelson would tell the story, though, he would emphasize what happened next. A small crowd showered Mickelson with a rendition of “Happy Birthday” – slightly less boisterous than the ’02 crowd crooning at Bethpage – and then he walked into the clubhouse, saw his wife Amy and hugged her with a smile.

Mickelson may have shot 74, but he is happy that was the score he turned in after a day of spraying it all over Congressional.

“This actually turned out to be a great day because I played horrific,” Mickelson said. “I started out hitting a good shot into the water to make double (at the par-3 10th hole). And to hit it where I did today and still end up only 3 over, I’m still in it.”

Against his assessment of the form he had during the round, Mickelson’s 74 was almost as good of a score as McIlroy’s 65.

“This easily could have been a day that could easily be in the 80s but I was able to get myself around and be only 3 over,” he said.

After opening with a double bogey, Mickelson went on to make three bogeys. He salvaged two birdies to keep within eyesight of the pace as he took a walking tour of the many awkward escapes Congressional can require of a player who is well off their normal game.

The five-time U.S. Open runner-up and four-time major champion feels as though he will improve significantly on Friday.

“I know it’s not far off because I’ve been hitting it well coming in, but today it sure looked far off,” he said. “A little change here and there, I’ll come out tomorrow playing a little freer, a little more aggressive. It happens for me when I take a week off before a major. I swing tight, play tentative.”

Mickelson knows the numbers were out there on Thursday, but is not creating a sense of urgency. With his record in this championship it is clear Mickelson has the right temperament.

“Good scores are out there, there were a lot of rounds under par and a lot of over par rounds, too. Although mine was high, it could’ve been a lot higher,” he said.

In his five U.S. Open second-place finishes, Mickelson was not without an abnormal round. Mickelson acknowledged it, saying, “I don’t normally play four days perfectly, so this was my bad round, and hopefully I’ll get it turned around tomorrow.”

In all but one of those close calls, he has a round of 73 or higher. Five years ago, Mickelson even had a 74 – unfortunately, it came in the final round at Winged Foot.