The season opens in Australasia, with the ANZ Ladies Masters, then the Australian and New Zealand Opens – both sponsored by ISPS Handa. The golf society, which attached its name to the Wales Open on the European Tour for 2012 and beyond, has also chartered a new British Masters event for the tour in August.

The tour makes its way to continental Europe in May, beginning with the Aberdeen Asset Mmgt. Ladies Scottish Open.

The typical double of the Evian Masters and Ricoh Women's British Open has been split up for 2012. To accommodate the Olympics in London next summer, the Ricoh Women's British Open has been moved from July to September and will be contested at Royal Liverpool. The Evian Masters will be played from June 26-29 in its final year before becoming an LPGA major.

The season will again conclude in the United Arab Emirates, with the season-ending Omega Dubai Ladies Masters at the Emirates GC from Dec. 5-8.

The biggest losses in the schedule were felt in Spain. Two years ago, the tour went into Spain for four events. Next year, there will be just one.

Despite the drop in events, the LET said it is pleased with its '12 offerings.

“We have been able to offer our members a wide range of attractive playing opportunities at some of the world’s finest international venues,” LET executive director Alexandra Armas said in a release. “We are pleased with the schedule, particularly given the poor shape of the global economy and these are exciting times for the LET.” 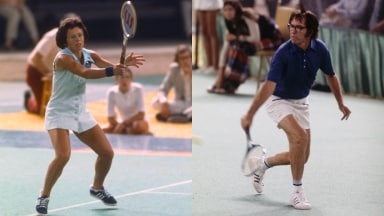 Randall's Rant: Hooray for a kinder, gentler 'Battle of the Sexes'

With Monday's announcement of the new Scandinavian Mix event between the European Tour and Ladies European Tour, exposure for the women's game is on the rise yet again.

The Ladies European Tour announced that former boxing executive Ivan Khodabakhsh will be their newest CEO beginning next month.