Lewis frustrated with fans, tourney after loss to Feng 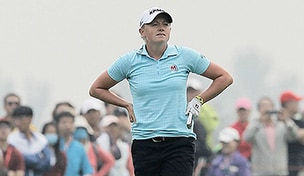 Getty Images
Sporting quite the facial hair, Isaac Sanchez is happy to be on Big Break Greenbrier.  -

Feng won the Reignwood LPGA Classic in Beijing. She’s from China, and Reignwood is one of her sponsors. Family and friends and a proud nationalistic following rooted for Feng in a final-round duel that proved very difficult for Lewis.

The way Feng won, it seemed predestined. She trailed Lewis by a shot at the 18th tee and closed with a dramatic eagle, thanks to an unlikely, terrific bounce. Feng’s second shot at the par-5 closing hole barely cleared a water hazard and hit hard ground, bouncing onto the green and off the flagstick. In a tweet, Lewis suggested it took a bounce off a rock.

Feng’s eagle gave her a one-shot victory against Lewis, who felt fortune and circumstances conspired against her.

“I feel like it was just taken from me,” Lewis said in her post-round news conference. “You’d like to win on a good shot, but, obviously, it wasn’t a good shot. It’s very frustrating. It was a frustrating day just with the crowds and dealing with all that. It was hard to play today.”

The final round was played in a heavy smog with some players wearing masks to filter the air they were breathing. All week long, players and caddies complained about fans taking photos.

Lewis expanded on the challenges via Twitter in these three tweets afterward:

Congrats to Shan Shan on the win, crazy shot at 18. Very disappointed in the fans in China this week.

Between all the cameras and cheering when I missed putts. It was just really hard to have fun out there. On to the next...

Btw what till you see the shot on 18 that won it! Lets just say it involved a rock and the flag stick...

Hours later, it appears Lewis deleted two of the three tweets and then posted the following tweet, suggesting she is going to take a break from Twitter.

For those whose were actually supportive on twitter, sorry to say I will be signing off of here. I'm sorry I say what I believe.