Lexi jumps to No. 14, in position for Int'l Crown 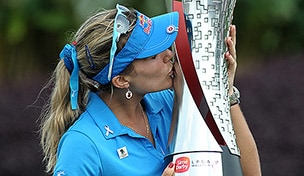 Getty Images
As she reads her putt, Selanee Henderson is filmed by a Big Break Atlantis camera crew.  -

Lexi Thompson moved into position to make the U.S. roster for the inaugural International Crown by jumping seven spots to No. 14 in Monday’s release of the new Rolex Women’s World Golf Rankings.

That makes Thompson the fourth highest ranked American woman in the world, behind No. 3 Stacy Lewis and just behind No. 11 Paula Creamer and No. 12 Cristie Kerr. Thompson won the Sime Darby LPGA Malaysia on Sunday. Her rankings’ move is notable because the four highest-ranked Americans will earn rosters spots on the U.S. squad in the International Crown next year. The competition to make that American team promises to be intense over the next six months.

The International Crown, a new Olympic-style team competition scheduled to make its debut at Caves Valley Golf Club in Owings Mills, Md., July 24-27, will feature eight international teams of four women each. The eight countries that qualify will be determined by the world rankings at the conclusion of the CME Group Titleholders on Nov. 24. However, individual qualifying to see which players actually make the eight teams will continue until the conclusion of the Kraft Nabisco Championship next spring.

Angela Stanford was the fourth highest ranked American in the world until Thompson made her big move. Thompson also jumped over Lizette Salas this week.

Here are the top 10 Americans in the Rolex world rankings as of Monday: