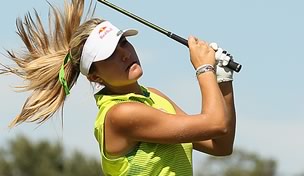 Getty Images
CRANS, SWITZERLAND - SEPTEMBER 04: Oliver Wilson of England tees off on the 15th hole during the second round of The Omega European Masters at Crans-Sur-Sierre Golf Club on September 4, 2009 in Crans Montana, Switzerland. (Photo by Andrew Redington/Getty Images)  -

Thompson, the youngest winner in the history of the LPGA, made it a Happy 17th making the cut in her LPGA rookie debut in the tour’s season-opener at tough Royal Melbourne. She shot 1-over-par 74 in difficult, windy conditions and is tied for 19th going into the weekend.

Thompson, a favorite for LPGA Rookie of the Year, doesn’t have to look far to see who her toughest competition will be for that honor. So Yeon Ryu, winner of last year’s U.S. Women’s Open, is atop the leaderboard at the Women’s Australian Open. Ryu deferred claiming LPGA membership for winning the major until this year and qualifies as a rookie.

“My goal is Rookie of the Year,” Ryu said Friday.