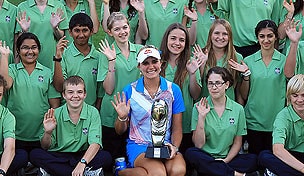 With her four-shot win at the Dubai Ladies Masters, Lexi Thompson picked up her second win in four months.

In September, the 16-year-old became the youngest winner in LPGA history, taking the Navistar LPGA Classic in Prattville, Ala. The Dubai win made her the youngest professional to claim a title on the Ladies European Tour.

Victories by a teen prodigy on two continents in four months are sure to cause commotion, but Lexi isn’t the only four-letter-lady racking up big wins late in the season.

World No. 1 Yani Tseng has won five times since September, with three LPGA wins and two other victories in four countries.

In the final third of the year, Tseng locked up almost half of her dozen worldwide wins this season.

In 29 worldwide starts this year, Tseng has missed just one cut and finished an event no worse than T-29. In a much more limited docket, Thompson posted two wins but only one other top-20 finish.

While Tseng seems untouchable anywhere on planet Earth, the teen appears to have found at least a quartet of courses that suit her young eye.

“Obviously I'll be going to Navistar [to defend]. Avnet again. They're both Robert Trent Jones courses. I like Evian, too,' Thompson said in a September interview.

Thompson will also have to contend with popularity in this country, the popularity that hasn’t completely taken hold for Tseng in the United States. The teen will generate more headlines for her pair of wins than Tseng may have all season. With each successive victory, Thompson will have to adapt to more exposure, more demands and more expectations.

Meanwhile, Tseng can continue to dominate with some degree of anonymity. Make no mistake … Yani and Lexi are aware of each other on a first-name basis.