Dear Mr. Whan ... What Lexi should send to LPGA commissioner 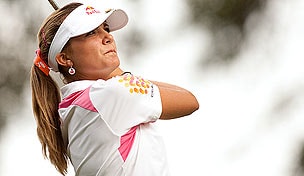 If I were Lexi Thompson, this letter would be going to LPGA headquarters tomorrow morning:

Thanks for approving my petition to attend LPGA Q-School prior to age 18.

I'm sure you saw where I advanced through the first stage. Don't take this wrong, I'm not asking for my money back, it's just that, due to recent events, I've decided Q-School isn't my thing. I've come into some money and I really want to travel. Even though I'm just 16, I've had some good experiences in Europe. I also enjoy spending time in Asia. Teenagers generally don't like sushi, but I am an exception.

I'm not real sure why your rules don't allow me to be a member of the LPGA, but I'm guessing it has something to do with protecting players that have been around for awhile because, and I'm not trying to seem overly confident, I think I've shown that I have the ability to compete. Anyway, I'm going to go out and see the world now. I think I might even play with the men from time to time. I'm also thinking about talking to my agent about having a few events of my own. Don't worry, I won't play on the weeks when there are LPGA tournaments. Oh wow, that gives me 33 weeks to choose from! Well, thanks for your time, I've got to run now. Some CEO's from large companies have left messages for me and I need to call them back. I hope to see you at the Kraft Nabisco Championship, or the U.S. Open, or the British Open, or maybe that other major you have.

Best of luck with your tour and if I can ever help.....