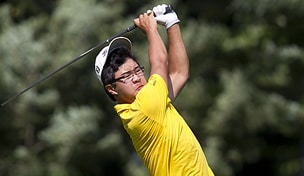 Getty Images
VIRGINIA WATER, ENGLAND - MAY 20: Oliver Wilson of England receives his ball during the first round of the BMW PGA Championship on the West Course at Wentworth on May 20, 2010 in Virginia Water, England. (Photo by Ian Walton/Getty Images)  -

After matching one Tiger Woods record, 17-year-old Jim Liu is setting his sights on another mark at this week’s U.S. Junior Amateur.

Liu, the 2010 U.S. Junior winner, shot rounds of 69-67 at Martis Camp Club in Truckee, Calif., to earn medalist honors for the second consecutive year. He finished at 8-under 136, two shots clear of Cameron Young.

Liu, a Stanford signee who will begin school in the fall, becomes only the third player in championship history to twice earn the stroke-play medal, joining Willie Wood and Woods. Last year, Liu advanced all the way to the 36-hole final but fell short, losing to Andy Shim, 4 and 3.

If he were to win again this year, Liu would join Woods and Jordan Spieth as the only players to win multiple U.S. Junior titles. When he won in ’10, at age 14, Liu became the youngest player to win the championship, breaking Woods’ record.

“To be medalist is a good honor,” he told the USGA on Tuesday. “It’s something to be happy about. You take these two rounds, know that you’re playing well, and go forward.”

Liu will face the 64th-ranked player when the first round of match play begins Wednesday. The 12-for-8 playoff was not completed Tuesday because of darkness.

Scottie Scheffler and Davis Riley each won two matches Friday, and as a result will square off in Saturday's 36-hole final at the U.S. Junior Amateur Championship.

Medalists Jim Liu and Bailey Tardy both faced stern tests in their opening-round matches Wednesday, but both ultimately prevailed to advance to the Round of 32 at their respective events. 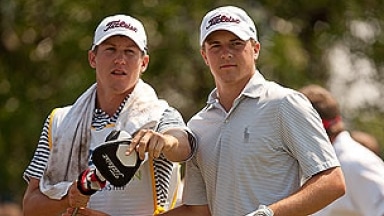 Jordan Spieth will face Chelso Barrett Saturday in the 36-hole final of the U.S. Junior Boys Amateur Championship. If he wins, he will join Tiger Woods as the only multiple winners of the championship in its history.