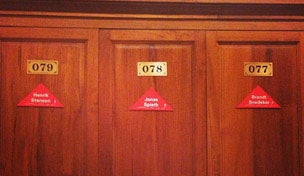 While both are PGA Tour winners and fiery on-course competitors, it's usually not that difficult to tell Jordan Spieth and Jonas Blixt apart.

Apparently, that's not the case this week in China.

As Spieth shared on Twitter, the staff in charge of locker assignments at Sheshan International Golf Club appears to have mixed the two rising stars, offering the 20-year-old Texan a locker for this week's WGC-HSBC Champions under the name 'Jonas Spieth.'

Guess I have a nickname here in China #Jonas http://t.co/U1KFZxyk2k

Having taken home PGA Tour Rookie of the Year honors last season, Spieth will make his 2013-14 season debut this week while teeing it up in a WGC event for the first time in his career. Blixt, who won his second career Tour title this summer at The Greenbrier Classic, will also participate in the limited-field event.

With the hope that further confusion can be avoided, the first- and second-round tee times for the pair will be separated by nearly an hour. The 29-year-old Swede will tee off at 8:45 a.m. local time Thursday alongside Richard Sterne and Brett Rumford, while Spieth will begin his opening round at 9:35 a.m., paired with fellow 2013 PGA Tour winners Dustin Johnson and Graeme McDowell.