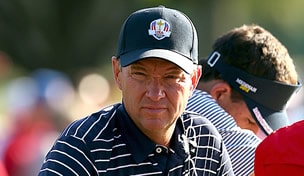 ORLANDO, Fla. – Davis Love III is so excited about Tom Watson’s selection as the American Ryder Cup captain that he is highly motivated to make the team when it travels to Scotland in 2014.

“I’ve known about Tom for quite awhile,” Love said at the PNC Father-Son Challenge at Ritz Carlton Golf Club. “The more I think about it, the more excited I get. It makes me want to make the team because I had so much fun with him in ’93. I would love to do it again.”

Love, captain of the American team beaten in Medinah after an epic Sunday collapse, played for Watson when Love made the first of his six teams as a player. The Americans defeated Europe 15-13 at The Belfry.

“His decisiveness and his confidence I think always showed through for us,” Love said. “I think that in Scotland, or overseas, it’s gonna be very, very important.”

Love is playing the Father-Son challenge with his son, Dru, a freshman at the University of Alabama. Dru was reveling in the fact that he beat his father in a match this summer for the first time. It was in a partnered team match.

“That’s the first time I’ve beaten him straight up from the same tees,” Dru said.