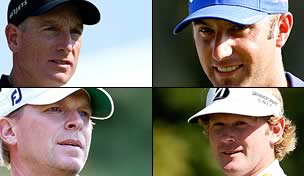 NEW YORK – As expected, U.S. Ryder Cup captain Davis Love III didn’t veer very far off script with his four picks on Monday, when he selected Jim Furyk, Steve Stricker, Dustin Johnson and Brandt Snedeker to round out his team at Medinah.

Stricker and Furyk appeared to be low-hanging fruit in many respects. Both are Ryder and Presidents Cup veterans who can pair easily with an assortment of players and are good putters.

Johnson, who missed three months of the season with injury, will be making his second start in the biennial matches after a strong run-up to the selections that included top-10 showings in three of his last five starts and a tie for fourth on Monday at TPC Boston.

Stricker has played in the last two Ryder Cups and has a 3-3-1 overall record but, more importantly, has become an easy fit with Tiger Woods in recent matches, including a perfect 4-0 record at the 2009 Presidents Cup.

Despite an 8-15-4 Ryder Cup record, Furyk has also been a key part of recent American teams, including a perfect card (5-0) at last year’s Presidents Cup.

Snedeker, however, seemed to be the wild-card pick. The Ryder Cup rookie was passed over for a spot on last year’s Presidents Cup team but seemed to solidify his spot on Love’s team with a torrid two-week run that included a runner-up showing at last week’s Barclays and a sixth-place finish on Monday at TPC Boston.

“It's been a pressure-packed couple of weeks for me, but it's been all worth it,” Snedeker said.

Bypassed for spots on the team were Hunter Mahan, ninth on the points list after the PGA Championship and the only American with multiple PGA Tour victories this season who is not on the team and Rickie Fowler, who was 12th in points at the deadline. Combined, the two players have posted just a single top-10 finish since July.

“It was tough to leave anybody off. I think as I said, this is probably the deepest, strongest year of earning points that I have seen,” Love said.