Love wants to play, not captain in cups 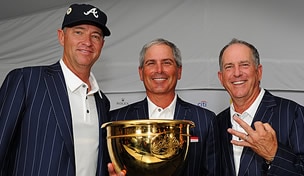 Getty Images
Rick Cochran takes a swing from the rough as a Big Break Greenbrier photographer captures the image.  -

DUBLIN, Ohio – While the chorus has already started following another U.S. Presidents Cup victory for Fred Couples to captain another American team, Davis Love III – one of Couples’ assistants at Muirfield Village – made it clear he’s not yet ready to take his turn as skipper in the biennial event.

Love, who captained the American side in last year’s Ryder Cup loss, said he’s more interested in playing the next Presidents Cup, not to mention the Ryder Cup, than driving a golf cart.

“Freddie asked me if I was ready (to captain)?” Love laughed late Sunday. “I’d love to do it, but I would love to do it down the road. Being an assistant is a lot more fun.”

Love – who will be 51 when the cup is played again in 2015 in Korea – said he still has designs to play on another American team and bolted central Ohio for this week’s Frys.com Open to begin his quest.

“The season starts tomorrow,” he smiled.