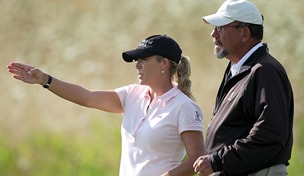 The LPGA was hit with sad news Saturday morning.

Doug Brecht, a long-time rules official for the tour, died on Friday. He had been battling West Nile virus for the last two months.

“I talked to Doug’s wife, Stephanie, and she told me that Doug passed very peacefully, and with his family close-by,” LPGA commissioner Mike Whan said in a statement. “I’m no expert on how to grieve, but this one has hit pretty hard. There are no words that can either ease the pain of losing a member of our family or help to fully explain or understand his passing.

“What I do know for certain is that Doug loved being a part of the LPGA family, and he told me – on numerous occasions – that he felt blessed to have a job that he loved so much.

“Personally, there was a distinctive peacefulness that always seemed to accompany Doug. No doubt, he is in a place of peace now and he will always be remembered for his kind heart and many gifts.”

Brecht, 62, who began working with the LPGA in July of 1990, was hospitalized in Toledo, Ohio, during the Jamie Farr in the second week of August. He was diagnosed with a severe case of West Nile virus. He was later transported via MedJet Assist to a hospital in Oklahoma City, near his Norman home and wife and family.

LPGA players, former players and officials reacted to the news via Twitter on Saturday morning.

Jessica Korda: “Really saddened about the passing of Dougie. He was my 1st ever ruling on tour. He was so special to me always someone you can come to with anything and he would always be there for you. Heaven got a special person today.”

Christina Kim: “Doug Brecht, you were always an admirable man. Always upheld the integrity of the game of golf. You will be missed sorely, rest in peace.”

LPGA chief communications officer Kraig Kann: “Doug Brecht was kind to all, a friend to the game, and fair in his work. He made everyone around him better.... and happier. RIP friend.”