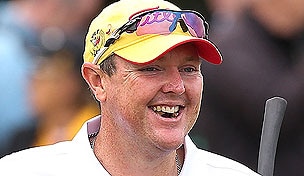 MELBOURNE, Australia – As Jarrod Lyle scaled the hill to his final green on Friday at the Australian Masters, his approach shot safely resting some 12 feet from the pin, the emotion returned.

“On the last I could feel myself letting down again and I thought 'naw, I’ve already done that. I’m done being a sook (complainer). It’s time to man up,’ ” he said.

Following Thursday’s emotional return to golf after Lyle's second bout with leukemia, Friday’s even-par 71 felt almost workmanlike. Or at least as normal as the 32-year-old who is making his first competitive start in 18 months could feel.

Following two bogeys through his first nine holes at Royal Melbourne, Lyle birdied the second (he started on No. 11) and sixth and arrived at the 10th hole well within the cut, which was his ultimate goal this week.

Lyle is at 1-over 143 and tied for 39th, an inspiring accomplishment considering that at this time last year he wasn’t sure if he’d ever play professional golf again.

“I’ve done it,” he smiled. “I came here and achieved my biggest goal.”

He also may have surprised himself in the process.

Lyle estimated he was at about 70 percent when he arrived for this week’s event and was just cleared to walk 18 holes by his doctors two months ago. But following two solid ball-striking days he said it may be time “to stop being so hard on myself.”

“I’d say he’s at least 70 percent if not better,” said Brendon de Jonge, who was paired with Lyle for the first two days at Royal Melbourne. “He hit very few loose shots over the two rounds.”

Stamina was Lyle’s greatest concern this week as he recovers from last year’s bone-marrow transplant and he said he had little trouble sleeping after Thursday’s round. The weekend promises to be even more physically demanding, but Lyle said the hard part was over. 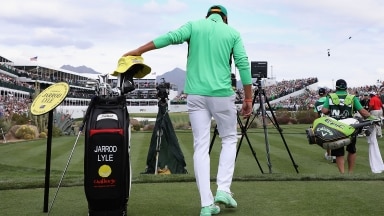