Mahan's 10 Saturday birdies gets him in WMPO mix 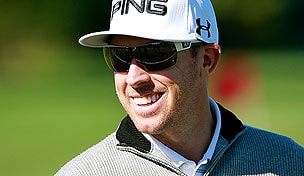 SCOTTSDALE, Ariz. – Hunter Mahan is hoping history repeats itself in a couple ways this week.

Through 54 holes at the Waste Management Phoenix Open, former champ Mahan (2010) is 11 under and in a tie for sixth place, four shots back of Bubba Watson.

And while four shots may sound like a lot to overcome, it wasn’t for Kyle Stanley in 2012, who came from a six-shot deficit to overtake Spencer Levin on Sunday at TPC Scottsdale.

Mahan posted his low round of the week on Saturday, a 6-under 65 that included 10 birdies, stringing together five in a row on Nos. 13 through 17.

“I think I played the holes, I wouldn't say the right way, but I was able to make it easy on myself,” Mahan said.

Mahan is looking for his first win on Tour since the 2012 Shell Houston Open.