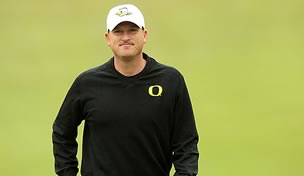 His three consecutive birdies on the back nine Friday fueled his second straight round in the 60s, and left him six shots behind leader Richard Lee.

Martin is making his first start on the PGA's developmental tour since the 2006 Oregon Classic, where he finished T-59. His best finish at the Boise Open, where he has played seven times previously, was a T-30 in 2004.

A former teammate of Tiger Woods at Stanford, Martin made headlines in 2001 when he successfully sued the PGA Tour for the right to use a cart in competition because of a birth defect in his right leg, Klippel Trenaunay Weber syndrome, that makes it difficult and painful for him to walk a golf course.

He qualified for this year's U.S. Open at The Olympic Club in San Francisco, but missed the cut by a shot.