Match by match: Round 2 WGC-Accenture results 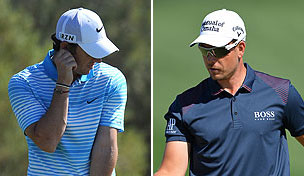 With the field pared to 32, match play continued Thursday at Dove Mountain. Here's a look at the results from the second round of the WGC-Accenture Match Play Championship:

Sergio Garcia (2) def. Bill Haas (7), 3 and 1: Garcia faced a 2-down deficit after seven holes Thursday, but managed to bounce back with an eagle on the par-5 eighth. The match was even when the pair stepped to the 14th tee, but from that point the Spaniard took command, winning three of the final four holes. With the win, Garcia advances past the second round in this event for just the second time since 2006.

Rickie Fowler (14) def. Jimmy Walker (6), 1 up: One day after taking out match-play stalwart Ian Poulter, Fowler added another scalp to his collection by taking out arguably the Tour's hottest player. The match was both closely contested and well-played, with both players pouring in birdies and neither holding larger than a 1-up lead. Fowler took the upper hand with a win on the 17th, though, and held off Walker with par save on the home hole. He'll now face Garcia in what should be a rather intriguing third-round match.

Jim Furyk (5) def. Charl Schwartzel (4), 3 and 2: Schwartzel won two of the first three holes to take an early advantage, but Furyk turned the tide by winning three straight holes from Nos. 11-13. After the South African made double bogey on No. 16, Furyk won his fifth hole of the back nine, and as a result he advances to play again on Friday.

Harris English (9) def. Rory McIlroy (1), 19 holes: This was one of the day's best matches, and closely contested throughout. English was 2-up through 13 holes but the Ulsterman rallied, winning three holes in a row to take a slim advantage. English leveled things with a birdie at No. 17, though, and went on to clip the former world No. 1 on the first extra hole.

Victor Dubuisson (7) def. Peter Hanson (15), 3 and 1: The Frenchman stormed out to an early lead, winning each of the first three holes, but Hanson leveled the match by winning three of the next four. The Swede was ultimately undone by the four par-5s at Dove Mountain, playing them in 3 over Thursday, and never led during the match. Dubuisson padded his lead to 2 up on No. 13 and closed things out when Hanson conceded on the 17th green.

Bubba Watson (3) def. Jonas Blixt (11), 2 up: Watson built a quick 3-up advantage over Blixt, though the Swede battled back and was eventually able to trim his deficit to only 1 down heading to 18. Blixt pulled his final tee shot though and ended up underneath a jumping cholla near the green - hardly ideal position. The hole was conceded shortly thereafter, and Bubba will now face Dubuisson on Friday.

Hunter Mahan (8) def. Richard Sterne (16), 2 up: After dispatching Zach Johnson on Wednesday, Sterne put forth another solid effort and actually led for much of the match. Mahan squared things with the South African on the 15th hole, then won each of the final two to advance at an event where he won in 2012 and finished second in 2013.

Graeme McDowell (4) def. Hideki Matsuyama (5), 1 up: Matsuyama built a 3-up advantage after just six holes, but the Ulsterman slowly whittled away at his deficit and squared the match for the first time on No. 17. He took his first lead of the day one hole later, closing out the Japanese phenom with a ticklish 15-foot, downhill put to set up a 2010 Ryder Cup rematch with Mahan.

Jordan Spieth (3) def. Thomas Bjorn (6), 5 and 4: Several of the second-round matches were closely contested, but this one was over quickly. Spieth won four of the first seven holes to build a sizeable advantage and then held on to defeat the Danish veteran, who failed to win a single hole during the match. Spieth certainly didn't give him much of a window - the 20-year-old's only bogey Thursday came on the 12th hole, at which point he had already amassed a 5-up lead.

Matt Kuchar (2) def. Ryan Moore (7), 1 up: Two former U.S. Amateur champs played a close match Thursday, but it was the defending champ at Dove Mountain who ultimately emerged victorious. While 15 of the 18 holes were halved in the match, Kuchar's win with a birdie on No. 15 proved to be the difference, and he'll now face Spieth in a compelling third-round matchup.

Jason Dufner (4) def. Matteo Manassero (12), 2 and 1: The young Italian had a 2-up lead through eight holes, and Dufner didn't lead the match until he left the 16th green with a 1-up advantage. The match appeared to be heading to the final hole until Dufner's chip from behind the 17th green rattled the pin and dropped, giving him an unexpected birdie. The reigning PGA champ won the match moments later when Manassero was unable to convert a birdie try of his own from the edge of the green.

Ernie Els (8) def. Justin Rose (1), 20 holes: Els had the early lead, but he had to hole a long par putt on 18 to send the match to extra holes. After birdies were exchanged on the 19th, Rose flubbed a greenside bunker shot on the 20th hole to give Els the advantage. Els was able to get up and down from an awkward lie and defeat the U.S. Open champion.

Louis Oosthuizen (8) def. Henrik Stenson (1), 4 and 3: This event has long been cold to its top overall seed, and that trend continued this week as Stenson was sent to an early exit on Thursday. Oosthuizen won three of the first four holes - twice via concession - and never really looked back, as he held at least a two-hole advantage from the second hole onward.

Webb Simpson (5) def. Brandt Snedeker (4), 4 and 3: In a match pairing two match play veterans, Simpson amassed a 4-up lead after just six holes and managed to keep the former FedEx Cup champ at bay from that point. Snedeker trimmed his deficit to 2-down after 10, but Simpson won the next hole and wasn't closely challenged again. He'll now play Oosthuizen on Friday in a contest between two former major winners.

Jason Day (2) def. Billy Horschel (10), 22 holes: This match seemed to be over quickly, as Horschel won three straight holes from Nos. 2-4. Day rallied back across the inward nine, though, and finally drew even with Horschel after 16 holes. The duo halved a number of holes from that point, but Day finally broke the deadlock with an accurate approach on the 22nd hole that led to a clinching birdie.

George Coetzee (14) def. Patrick Reed (11), 21 holes: Reed let one get away in this match, as he led the entire back nine and held a 1-up advantage on the 18th hole. WIth Coetzee off the green, Reed found trouble with his approach and the South African was granted new life. Coetzee ended one of the day's longer matches when he stuffed his approach to the 21st hole and Reed was unable to hole a lengthy birdie try of his own. 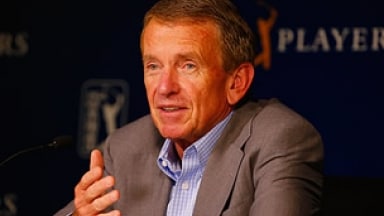 Since the WGC-Match Play Championship was played in February the Tour has been scrambling to find a replacement sponsor and venue. 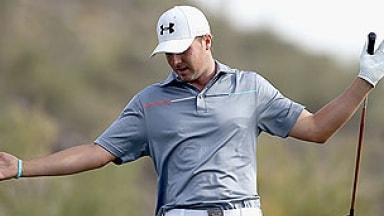 Two weeks ago at the WGC-Match Play Championship Jordan Spieth looked to be on cruise control, again. However, things took a turn in his Elite Eight match with Ernie Els. 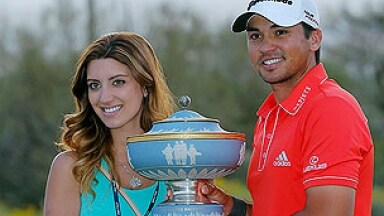 Along with celebrating a World Golf Championship that took him to No. 4 in the world, Jason Day couldn't help but consider the rest of the young season and wonder just how much higher he could go.