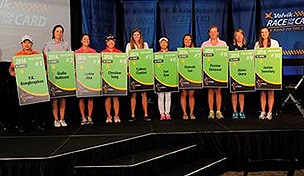 Getty Images
KOHLER, WI - AUGUST 09: Tiger Woods works on his golf swing with his caddie Steve Williams during a practice round prior to the start of the 92nd PGA Championship on the Straits Course at Whistling Straits on August 9, 2010 in Kohler, Wisconsin. (Photo by Andrew Redington/Getty Images)  -

American Megan McChrystal won the Symetra Tour Championship in Monday’s conclusion to the weather-delayed season finale of the Volvik Race for the Card.

McChrystal had just one hole to play on Monday morning and birdied it to finish two shots ahead of France’s Perrine Delacour, whose second-place finish also made her a big winner.

The top 10 on the tour’s season-long money list were awarded LPGA cards for next year in a ceremony Monday morning with the tour announcing Symetra has renewed for three more years as its title sponsor. Delacour jumped from No. 20 on the money list to No. 8 with her second-place finish on LPGA International’s Jones Course in Daytona Beach, Fla. She was the only player to move up from outside the top 10 in the season finale.

McChrystal’s victory bumped her to No. 18 on the money list, earning her a pass to the final stage of LPGA Q-School in December.

Olivia Jordan-Higgins’ missed cut on the weekend cost her. She dropped from No. 8 on the money list to No. 11, missing a card by $114.

Paula Reto had a share of the lead late in the final round of the Symetra Tour Championship but double bogeyed the 16th hole to fall away. She finished third to end up No. 33 on the money list.

Here are the 10 players who earned LPGA cards off the final money list: