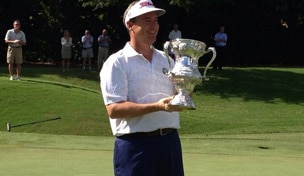 Getty Images
KIAWAH ISLAND, SC - AUGUST 06: Robert Garrigus of the United States hits a tee shot during a practice round of the 2012 PGA Championship at the Ocean Course on August 6, 2012 in Kiawah Island, South Carolina. (Photo by Ross Kinnaird/Getty Images)  -

At 50 years young, Michael McCoy is headed to the Masters.

Playing in a USGA championship for the 38th time in his career, McCoy ousted Bill Williamson, 8 and 6, to win the U.S. Mid-Amateur title Thursday at the Country Club of Birmingham. He becomes the second oldest champion in the history of the event, trailing only Randal Lewis who won in 2011 at age 54.

A native of West Des Moines, Iowa, McCoy played in the U.S. Senior Open and U.S. Amateur earlier this season before making his 14th career Mid-Amateur start. He amassed a 5-up lead at the halfway point of Thursday's 36-hole final and increased his advantage from there, closing out the match with a birdie on the 30th hole.

Williamson, 33, entered the final without having trailed at any point during the match-play portion of the event and held a 1-up lead after three holes Thursday morning. He would lose the next three holes in succession, however, to quickly fall into a hole for the first time all week and failed to record a birdie during the championship match.

Contested since 1981, the U.S. Mid-Amateur is open to male amateur golfers age 25 or older with a USGA handicap index of 3.4 or lower. The winner of the event traditionally receives an invitation to play in The Masters the following spring.