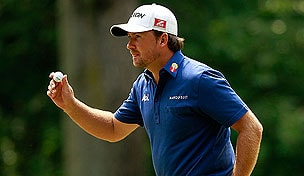 BETHESDA, Md. – Graeme McDowell has said for the past three days that he had no regrets the last year being the U.S. Open champion. He also has said that he’s at peace with giving the trophy back and getting on with the rest of his career.

Many didn’t expect McDowell to factor this week. In one breath he says he’s confident in his game and thinks he can play well, the next he admits he’s had difficulty grinding out his best score when he’s not in contention. The final-round 79 while in the hunt at The Players and a third-round 81 at the Wales Open while near the top of the leaderboard would prove his comments true.

But something clicked in Round 1 at the U.S. Open. McDowell opened with a bogey on the first hole, then rebounded with birdies on Nos. 2 and 6 and shot 1-under 70.

“I felt really, really good this morning,” McDowell said. “I set myself some challenges this morning to go out and try to think well, try to go through my processes correctly, through my routines and just be patient and enjoy the round.”

The most eventful hole for McDowell was on the par-5 ninth hole. He and playing partner Louis Oosthuizen both hit their second shots short but they landed next to each other and were touching in the fairway. McDowell marked his ball, moved it a club length away, then moved it back into position after Oosthuizen hit his third shot first.

“It was a very unusual circumstance,” McDowell said. “Louis had to go first, and thankful he didn’t remove a huge piece of turf. I didn’t know what I was going to do to recreate my life if he had taken a huge divot. He picked it off the turf quite cleanly and I was thankful for that.”