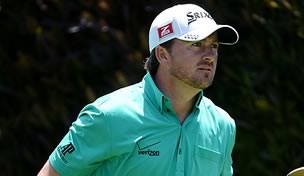 PEBBLE BEACH, Calif. – Maybe it was the picturesque surroundings or maybe it was just time. Either way, Graeme McDowell is poised for a fresh start.

On Tuesday at Pebble Beach, the sight of his breakthrough major victory at the 2010 U.S. Open, McDowell said he is prepared to refocus on golf in 2014 after an eventful year last season both on and off the golf course.

“I’ve made a conscious effort to cut back on my off-course obligations this year,” he said. “I feel like I’m in a better place to play golf now.”

McDowell, who is making his 2014 debut at this week’s AT&T Pebble Beach National Pro-Am, got married last year and opened his own restaurant, Nona Blue, near his home in Orlando, Fla.

On the course things were just as eventful. He posted top-10 finishes in four of his first seven events in 2013, including his win at the RBC Heritage. He added another victory at the Volvo World Match Play in May on the European Tour, followed by three consecutive missed cuts. It was a similar story after another victory at the French Open in July when he closed the season without another a top-10 finish and failed to advance to the Tour Championship in the FedEx Cup playoffs.