Rory blown away by weather 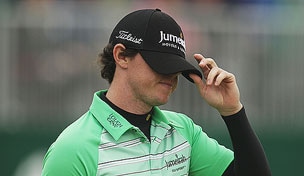 SANDWICH, England – If the U.S. Open walk-over was instant redemption for Rory McIlroy those dissecting his third-round 74 on Saturday at Royal St. George’s may want to hold off on the armchair analysis.

Many eyes were on the Ulsterman as Saturday’s forecast delivered the harsh conditions that many had anticipated. At last year’s Open Championship McIlroy’s bid for his first claret jug was blown off course with a Friday 80 at St. Andrews and when he began Day 3 just four strokes back some considered Saturday’s gale a litmus test.

Although McIlroy lost ground in his quest for an Open title, his 4-over-par card was actually nearly a stroke and a half below the field average (75.412) despite a double bogey-7 at the 14th hole when he hit his tee shot out of bounds.