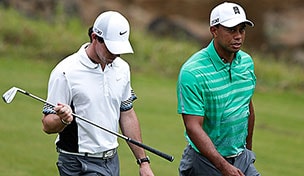 Rory McIlroy is finally off the schneid in 2013 – unofficially, of course.

He beat Tiger Woods, again, in their 1-on-1 match Monday in China.

Displaying the kind of dazzling form that has largely been absent this season, McIlroy ripped off four birdies and an eagle in his final seven holes to shoot 6-under 67 and defeat Woods by a stroke in their made-for-TV exhibition at Mission Hills in China.

Last year, in what was dubbed the “Duel at Jinsha Lake,” McIlroy also carded a 67 to top Woods by one.

“He schooled me twice,” Woods told the crowd afterward, according to Reuters.

“Well, I don’t know about that,” McIlroy replied. “I beat you by one shot twice.”

Woods, who coughed forcefully at times and said he had picked up a cold from one of his children, had a chance to tie the match, but he couldn’t get his 20-foot eagle on the last to drop.

This was Woods’ first competition since Oct. 6, when he helped lead the Americans to another victory at the Presidents Cup. The world No. 1 will tee it up next week at the Turkish Airlines Open.

McIlroy, meanwhile, was coming off a T-27 at the BMW Masters. This week, he will play at the no-cut, WGC-HSBC Champions in Shanghai, his final chance to qualify for the season-ending DP World Tour Championship in Dubai, an event he won a year ago.

“I’ve seen a lot of promising signs over the past few weeks in practice and also in competitive play,” McIlroy said afterward. “I think as I showed out there, I’m hitting the ball well.”

Both players earned at least $1.5 million for playing in the 18-hole event, according to published reports.