McIlroy got cheers, Fowler had low round 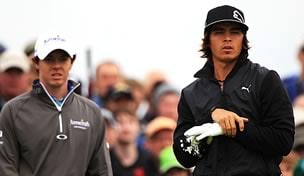 SANDWICH, England – Rory McIlroy, Rickie Fowler and Ernie Els appeared on the first tee together Thursday at Royal St. George’s and McIlroy seemingly was the only one who didn’t realize the applause was mostly for him.

Fowler detected a distinct partiality toward McIlroy, as did Els. McIlroy was only thinking about hitting his first tee shot in the fairway, the first shot he’d hit in competition since he tapped in for par on the 72nd hole at Congressional, good for an eight-shot victory at the U.S. Open.

“It has a feeling like he’s a hero over here,” Fowler said of McIlroy. “Obviously he’s had a pretty big impact and impressive playing recently. It’s fun to play alongside him. I’ve always enjoyed it, and definitely feel like the crowd was in his favor today.”

Five hours after the round started here at Royal St. George’s it was the American who played better than the former British Open champ and the current U.S. Open victor. Fowler shot even-par 70 while McIlroy shot 71 and Els shot 72.

The two young hotshots, Fowler and McIlroy, know each other well. They first played together during their amateur days when they squared off in a foursomes match at the 2007 Walker Cup at Royal County Down. Fowler and his partner that day, Billy Horschel, defeated McIlroy and Jonathan Caldwell, 2 and 1.

They’ve been linked together for most of the past two years. Both represented their respective countries in The Ryder Cup last year, both were the top two candidates for PGA Tour Rookie of the Year (Fowler won in a much-debated fashion) and both are 22 years old. They were paired together with Jason Day for the first two rounds of The Masters and McIlroy stole the spotlight, for reasons both good and bad.

Now though, McIlroy officially has the upper hand in the burgeoning rivalry. He already had a PGA Tour victory, but after last month’s performance at the U.S. Open McIlroy has a major championship. Meanwhile, Fowler still is trying to figure out how to close the deal under pressure. He failed two weeks ago at the AT&T National when in contention and shot a final-round 74.

“We’re very comfortable playing alongside each other. He played nicely today,” McIlroy said. “You can see that he really loves links golf. He really likes it and he’s imaginative. We seem to play pretty good when we play together.”