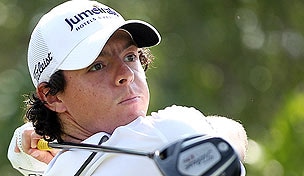 World No. 2 Rory McIlroy and No. 4 Martin Kaymer are hoping to squeeze No. 3 Lee Westwood out of the Dubai Desert Classic title on Sunday.

Westwood established a one-shot lead over Stephen Gallacher and is two clear of McIlroy and Kaymer after shooting 5-under 67 on Moving Day at Emirates GC.

The Engilshman’s highest-ranked challengers, however, are hopeful to keep close on Sunday due to windy conditions expected in the emirate. Gusts of up to 30 mph are forecast for the final round.

“Maybe we've got a little bit more wind, what the forecast is, and then he can't run away and hopefully we can catch him,” Kaymer said after a third-round 70.

McIlroy said, “[T]o be honest, the windier the better. It means that the guys in front of me, unless someone plays really, really well, can't really get away from me. So I wouldn't mind that.”

The Ulsterman’s windy wishes may be a bit surprising considering comments he made in frustration after last year’s Open Championship.

“My game is suited for basically every golf course and most conditions, but (wet and windy) conditions I just don’t enjoy playing in really. That’s the bottom line. I’d rather play when it’s 80 degrees and sunny and not much wind,” he said last July.