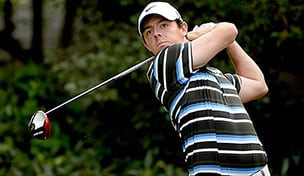 For the first time Tuesday, Rory McIlroy admitted that all of the off-course distractions have had a negative impact on his game this season.

“I’ve obviously got people to handle that stuff for me and I only see a fraction of it,” he said in Dubai, according to The Telegraph. “But it’s something that shouldn’t be in my mind. You know, it’s something that I don’t really think any athlete or anyone should go through.

“I’ve seen more lawyers' offices and more lawyers this year than I care to see in my entire life. It’s not something I ever want to go through again and I’m making sure I won’t ever go through it again.”

McIlroy is being hit with a litigation double whammy, as Oakley is suing him for breach of contract and the 24-year-old is also embroiled in a legal battle with his former management company, Horizon Sports Management, which will be heard in court next fall.

On the course, McIlroy has failed to live up to the expectations he set after a five-win campaign in 2012. He has yet to win and has dropped to No. 6 in the world rankings, but he has six top-10s worldwide, including two in his last three starts.

“As a golfer you want your mind as clear as possible, and it’s hard for that to happen if you’ve got other things going on that, firstly, you don’t want to happen, and secondly, you don’t feel should be happening,” he said, according to the report. “It’s been a distraction … and obviously not what I wanted to have in my life.”