McIlroy teases Woods on 'getting old, getting bald' 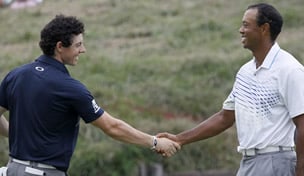 In an exclusive, wide-ranging interview with the Irish Times, Rory McIlroy opened up about his budding relationship with Tiger Woods and hinted that he may even help facilitate a singles match between the two superstars at next week’s Ryder Cup.

McIlroy, the world No. 1, told the newspaper that he’s struck up a genuine friendship with Woods – and it even involves a bit of good-natured ribbing.

“Tiger gives me stick about being short,” McIlroy said, according to the report. “He always asks me, ‘Seriously, how tall are you?’ I’ll say, ‘5-foot-9.’ ‘Yeah, but without the hair? That’s 5-7, right?’ He’ll ask me, ‘What do you do when Caroline (Wozniacki, McIlroy’s girlfriend) wears heels?’

“But I give him grief about all sorts – getting old, getting bald. He doesn’t take himself too seriously, certainly not when I’m around. … I’ve been seeing loads of Tiger and I’ve got to know the person.”

McIlroy and Woods played together for the first time in an official event in January in Abu Dhabi. Because the pairings in the FedEx Cup playoffs are determined by the players’ standings in the points race, they have been grouped three times in the past five weeks (Barclays, BMW), including this week’s Tour Championship, at which they can claim a $10 million bonus.

“Every time I ask him, ‘What are you doing next week?’ and he’s like, ‘I’ve got the kids and I can’t wait to do this, to do that,’” McIlroy said, according to the Times. “I can tell you he’s a very committed father, which is probably all because of what happened and wanting to make up for what he did.

“He’s still a great player. We’ve been seeing a lot of each other, in the gym, on the course.”

Golf fans are clamoring for a Ryder Cup singles match between McIlroy and Woods next week at Medinah. Even the Northern Irishman said he’d be up for a high-powered showdown.

“It would be great fun to be part of,” McIlroy said, according to the report. “The atmosphere would be absolutely incredible. I might say to Tiger, ‘I’ll have a word with Jose, you have a word with Davis, and I’ll see you on the first tee.’”

No doubt, this rivalry is a friendly one.