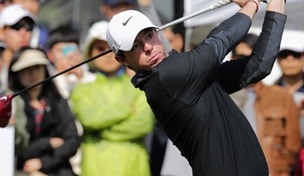 Getty Images
DUBLIN, OH - OCTOBER 03: The Ohio State University marching band plays prior to the start of the Day One Four-Ball Matches at the Muirfield Village Golf Club on October 3, 2013 in Dublin, Ohio (Photo by David Cannon/Getty Images)  -

Making his first competitive start in a month, Rory Mcllroy knocked off the rust and closed strong for a 1-under 70 Thursday at the OneAsia Tour’s Kolon Korea Open. He is three shots off the lead of Ik-jae Jang.

The world No. 6 went out in even-par 36 but made a double-bogey 5 on the par-3 13th after his tee shot found the water. “I just wasn’t very comfortable with the tee shot,” he told reporters afterward.

McIlroy rebounded to birdie the last two holes, and three of the last five, to finish under par for the day.

“I felt I was a little rusty after the four weeks off,” he said, “but I battled back nicely and to end up under par for the day wasn’t too bad.”

McIlroy hadn’t played in a month, since he tied for 59th at the BMW Championship and was eliminated from the FedEx Cup playoffs.

Earlier this week, he admitted he was “under golfed” during the first few months of the season. That won’t be a problem for the rest of 2013, however, with six starts in the next eight weeks.

With two off weeks mixed in, he is scheduled to tee it up at the European Tour’s BMW Masters in Shanghai, a one-day exhibition with Tiger Woods, the WGC-HSBC Champions, the European Tour’s season finale in Dubai, the Australian Open and the Northwestern Mutual World Challenge.