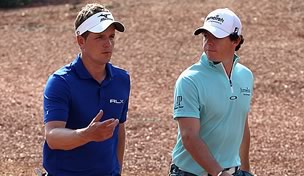 Rory McIlroy believes the comparison Luke Donald made between him and Tiger Woods was misinterpreted.

'I think what he said was maybe taken a little bit out of context,' McIlroy said Thursday at the Dubai World Championship.

On Wednesday, Donald said he believed McIlroy was the greatest natural golf talent he had ever seen.

“I think Tiger’s work ethic has always been tremendous and his mindset as well. I think his mindset is what has separated him from the field when he was really at the top of his game. But in terms of talent, I think Rory has more talent,' Donald said.

The world No. 1 immediately took flak for the comment, taking to Twitter to clarify his definition of talent and the comparison.

'Talent can only take you so far; you need the right attitude (mindset) and application to perform at the highest level ... never try to disrespect Tiger in any way. He is still the greatest player I have played with,' Donald said.

'Look, it's one thing to have talent but it's another to actually have the capability of turning that talent into something productive. I think what Luke was saying was maybe golf comes as easy to me as it does for Tiger,' he said.

'I'll never know, but, look, Tiger's won 90-whatever tournaments worldwide and 14 majors and that's definitely more of a talent than five wins and whatever it is.”

'There's different types of talent,” McIlroy continued. “You could say some of Luke's short-game shots out there today were unbelievable. He's definitely got more talent than me around the greens.”