McIlroy tees it up with former President Clinton 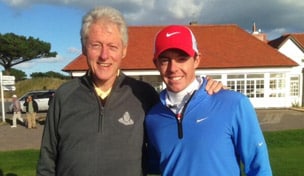 Getty Images
KIAWAH ISLAND, SC - AUGUST 06: Dustin Johnson of the United States hits a shot during a practice round of the 2012 PGA Championship at the Ocean Course on August 6, 2012 in Kiawah Island, South Carolina. (Photo by Andrew Redington/Getty Images)  -

Though brief, the 'offseason' for golf offers players a variety of options for spending their down time: some take a break from the game, some take up other activities, and some play golf recreationally with former presidents.

Two-time major winner Rory McIlroy falls into the third category, as the Ulsterman teed it up this week with Bill Clinton according to a tweet from the former President:

Fantastic day in Ireland golfing w/@McIlroyRory and getting to know the great work of the @roryfoundation. pic.twitter.com/2qG0e88Zxp

Clinton has been on the Emerald Isle for several other recent speaking engagements, and the pair were photographed earlier this week at a dinner with U2 front man Bono.

Having been out of action since missing the field for last month's Tour Championship, McIlroy's break from competition is quickly coming to a close. He'll be in the field for next week's Korean Open, followed by an appearance at the WGC-HSBC Champions. In between those two starts, he'll reprise his 1-on-1 match with current world No. 1 Tiger Woods on Oct. 28 in China.