Woods drops to 17th in rankings as McIlroy rises to fourth 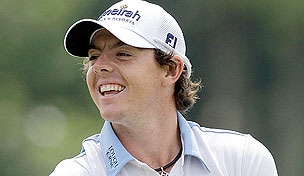 Getty Images
PORTO SANTO ISLAND, PORTUGAL - MAY 19: Richard Kind of the Netherlands tees off the 3rd hole during day one of the Madeira Islands Open on May 19, 2011 in Porto Santo Island, Portugal. (Photo by Dean Mouhtaropoulos/Getty Images)  -

Though the world is ready to crown Rory McIlroy the top player in the world of golf, it was mathematically impossible for him to beat the Excel spreadsheet which controls the Official World Golf Ranking.

With his romp of a win at the U.S. Open, Rory McIlroy moved up from eighth to fourth in the latest edition of the rankings on Sunday night. He is within 35-hundredths of a point of catching Martin Kaymer for third on the ladder.

Aussie Jason Day also made a big move with his second consecutive runner-up finish in the majors. Day moved up to ninth from the 18th spot – a deserved jump for a player who has had a great year on big stages.

Charl Schwartzel bumped Dustin Johnson out of the world top 10, getting into the 10th spot from 11th last week.